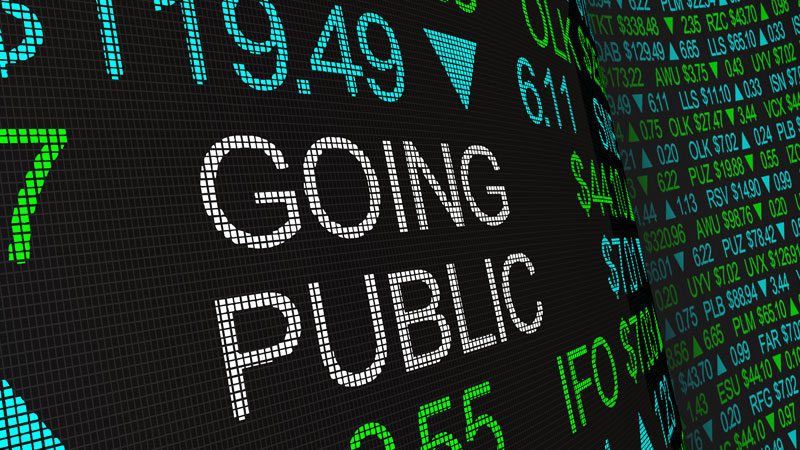 What are the top drivers to going public:

The ideal candidate for an IPO generally has both a well-established track record of steadily growing sales and earnings, and operates in an industry that’s currently in the news.Companies can go public without the above general characteristics but with lots of public interest. But once listed both the company and its founders may enjoy numerous financial benefits and advantages of going Public.

For the Founders of a company which has gone public, a much higher degree of liquidity for their investment is generated.

The common stock of a privately held corporation is generally an asset without a readily available market or an easily determinable value. A publicly traded company, however, has a ready market for its stock at quoted prices. In addition to the portion of their stock that the founders may have sold as part of the original public offering, the founders have the ability to sell additional shares for diversification or other reasons, although such sales may be subject to significant limitations.Founders can use public offerings as a liquidity tool to access capital from investors and institutions. Once a private company engages in a public offering, the common stock is immediately sold on the open market, including at least some of shares of the founder owners/entrepreneurs. This means the stock that was once locked in a private business now be sold to both accredited and non-accredited investors alike. While there may be some restrictions on how much share volume can be sold (like the likely requirement for removal of the Rule 144 restriction), the stock is still more liquid post-public-offering than it ever was previously.

Portfolio Diversification: Thanks to the first point made above, founding officers and managers are now better able to diversify their investments away from their company. For most founding entrepreneurs much of their life’s work and investment is often held in one single business. Until that company is either acquired or taken public, that founding member will have all his/her stock held in a single private entity. Going public helps to resolve this issue by allowing the stock to be sold on a public exchange or even directly exchanged for shares in other companies or funds, thus spreading and diversifying the risk held by the founder.

Repayment of Personal Loans: This also includes the dissolution of personal guarantees for loans taken out by the founders on behalf of the company. This can be a great relief of a burden on the founders who may be used to pledging such things as their home as collateral when obtaining financing from a bank for funding their business. In some cases, founders may have advanced money, delayed personal salaries or provided direct loans to the business. Being public can assist in righting all such personal sacrifices on behalf of the company.

Delay/Shift of Estate Taxes: Unlike private firms where estate taxes will likely need to come from the company funds, a public firm has an established stock value that can be used as an alternative source for paying inheritance tax if an inheritor wishes to do so. It’s an “in-kind” payment alternative that is pretty powerful at preserving family wealth.

Control of Timing for Capital Gains: The surety of death and taxes are unavoidable, but you can work to delay them as much as possible. With public company stock a founder can delay the timing of capital gains to when it suits his/her investment strategy. This occurs as the stock is slowly sold (in accordance with the timeline set forth by the firm’s broker-dealer) on the open market. In some cases, the gains can be offset by other losses outside the business as well such as other recognized losses from other businesses assets or real estate investments.

Easier to Secure Personal Loans: Because public stock offers a very acceptable form of collateral for a bank, it is much easier to secure financing for say a dream home or land investment against the value of publicly-traded stock shares. Some of the biggest CEOs on the Fortune 500 are able to jump into large land and real estate holdings because they own shares in public companies that can be used as personal collateral for securing the stock.

For the Company, when its initial sale of stock to the public is achieved and thereby “goes public,” the major benefits include the following:
Generate additional capital for growth without the risks of debt or the restrictions that may be demanded by venture capitalists. Assuming that the stock is sold in a “primary” offering, one in which stock is sold for the account of the company, new capital is raised without the associated risks, restrictions and costs of debt or the constraints of venture capitalists. Although the company’s use of the proceeds of the offering must be explained to potential purchasers of the stock in the prospectus given to them by the underwriters, the funds can be used for any proper purpose which has been disclosed in the prospectus. Of course, if the stock sold is that of the shareholders in a so-called “secondary” offering, the proceeds go to the selling shareholders. Often the initial offering is a combination of both a primary and secondary offering, thereby providing both new capital to the company and investment diversification and liquidity to the founders.

Price-to-Earnings Ratios: When a company is publicly listed, a private company is taken to the public markets can send the private P/E ratio of a company through the roof in short order, especially if the company is solidly profitable with a good story for future growth. This means an investment or early stock interest in a company immediately jumps to a value much, much higher than it was as either a fledgling startup or viably-profitable private business. The value accretion to public companies is real and very helpful for an entrepreneur seeking to extract as much value as possible out of a deal.

Founders’ Pay After an IPO Compensation of newly public companies: Besides the pride they take in turning a startup into a reputable company underwritten by big Wall Street banks and valued and traded by public markets, Founders usually reap an enormous cash windfall. That’s the prize for taking a risk and building something new and appreciated on the market. Non-founder chief executives of newly public companies see their salaries go up somewhat predictably. Average base salaries for the heads of software companies, for example, increase by more than 15% in average. Of course, salary is only one component of total compensation. Other pieces of the pie include bonuses, company equity, options for stock, and other forms of pay. Most of the founders taken to IPO receive an increase in compensation following their initial public offering (IPO). Once the company goes public, the compensation committee is generally looking at making sure the shareholders are getting their money’s worth, and they are setting up incentives with executives to perform. The market and the compensation comity generally remembers that these founders have taken tons of risk helping their companies to grow. And once a company goes public, they usually want to scale back the risk and want to get paid in cash and salary.